The Early Development Instrument (EDI) provides the Rockford region with data that shows where children have strengths and opportunities for growth across a geographic area. This gives us a community-level understanding in child development that we can use to inform where efforts and resources should be focused.

HOW ARE THE CHILDREN?

The first five years of human development are critical to future wellbeing and academic achievement. Research shows the experiences a child has from birth to age five directly influence his or her ability to learn and succeed over their lifetime.

A child who enters kindergarten without the right tools is at a disadvantage and faces challenges that can multiply over time.

Yet even though we know the first years are a critical time in human development, there is a huge social disparity in institutionalized support for families of children in this age group.

OUR WORK IS BASED ON EVIDENCE AND RESEARCH

As one of only a handful of communities in the United States to use the UCLA-led Early Development Instrument (EDI), Rockford keeps a pulse on the wellbeing of our youngest residents to improve their potential for lifetime success by working to shift conditions in the environment for systemic change. And our Ready to Learn initiative is leading these efforts to help guide and push transformative change in our region.

The EDI is a validated, population-based measure of early child development across five key domains:

WHY IS THE EDI IMPORTANT?

The health of a community can be measured by the wellbeing of its youngest and most vulnerable residents and the resulting EDI data produces a valid and reliable representation of our youngest children’s health and development.

A community with healthy families and a strong support system around parents and caregivers of young children is a community that develops its own leadership and innovation, attracts outside talent, and retains its highest achievers who go on to build a strong local economy, a safe community, and a great place to live and work.

EDI IN THE ROCKFORD REGION

In 2019, Alignment Rockford’s Ready to Learn team, in partnership with Rockford Public School District 205, Transform Rockford, and Chicago’s Erikson Institute, introduced the EDI to Rockford. The EDI gathered data from an assessment of more than 2,000 public and private kindergarten students, in addition to neighborhood data. The results of this first wave of the EDI identified several themes including vulnerabilities, which were not isolated to a specific area in Rockford, and strengths, which were more prevalent than expected in several areas of the community.

In 2022, Alignment Rockford and RPS 205 — along with new partners Harlem School District 122 and UCLA’s Center for Healthier Children, Families, and Communities — conducted a second wave of the EDI data collection to evaluate the developmental readiness of children entering kindergarten in Rockford and Loves Park.

During the 2021-2022 academic year, kindergarten teachers from 26 schools throughout Rockford and Loves Park completed a 103-question survey on each of their students across the five key early childhood development domains.

The EDI data is mapped by neighborhoods using the U.S. Census-designated boundaries, showing the geographic areas in which children are doing well or may be experiencing challenges. 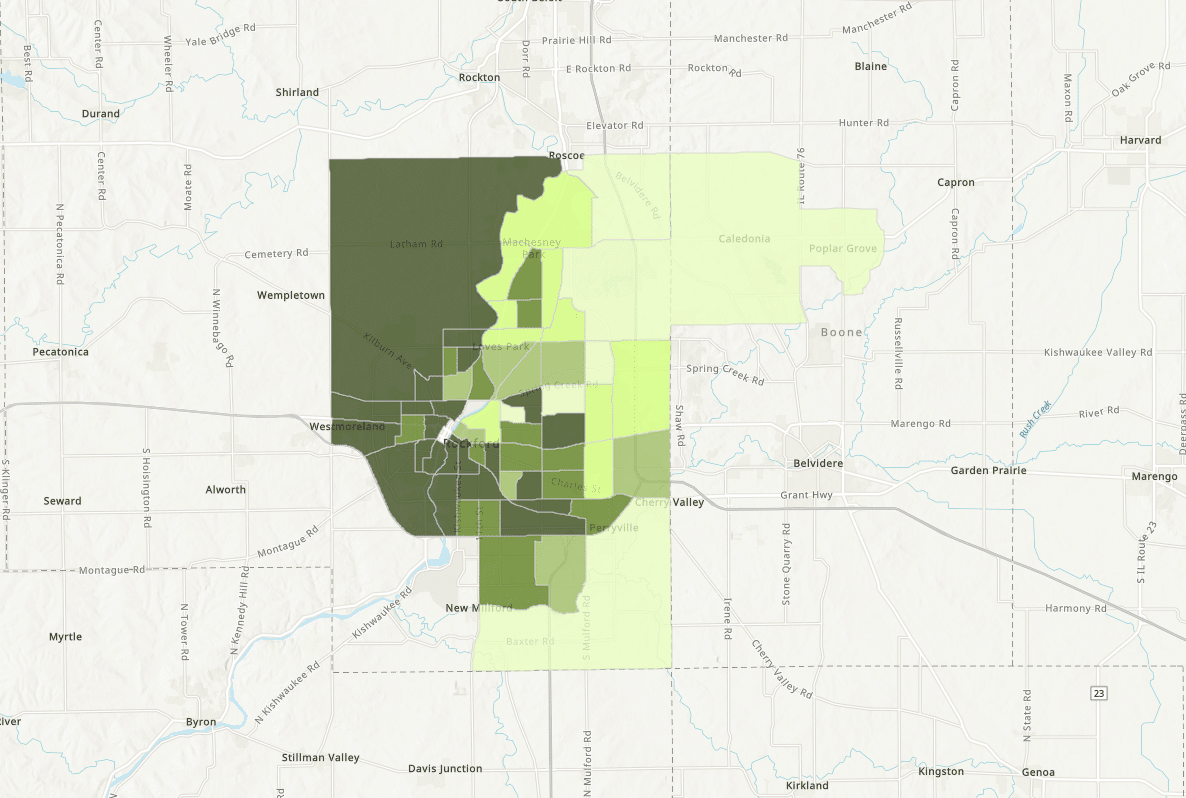 Each neighborhood is assigned a color-shaded category that represents the saturation of vulnerability in one or more of the five developmental domains. High vulnerability could indicate future challenges in life, including low academic achievement and poor health.

In addition to mapping the five domains, the EDI also has the option to overlay other indicators and community assets, such as household income, rate of domestic violence, health services and early childcare centers, to add context to the map.

HOW COMMUNITIES CAN USE EDI FINDINGS

The EDI provides communities with data that show where children have strengths and opportunities for growth across a geographic area. This population approach provides a community-level understanding in child development that local municipalities, schools, service providers and other stakeholders can use to inform where efforts and resources should be focused.

The EDI can help communities:

Since its Rockford launch in 2019, the EDI data has served local agencies and organizations to better understand the state of our children’s wellbeing. With it, these organizations have been able to develop strategies for providing solutions that are responsive, aligned, and non-duplicitous, while helping our region secure millions of dollars in funding to support early learning and care.

The critical importance of these early years is the driving force behind Alignment Rockford’s Ready to Learn initiative, a collaboration with local organizations and businesses committed to supporting and uplifting the experience of raising young children in Rockford.

LEARN MORE ABOUT READY TO LEARN
EXPLORE THE 2022 EDI MAP

The 2022 Rockford and Loves Park data is now live and available to the public. We invite you to explore the data and learn more about how to support early childhood learning and care in the Rockford region at two upcoming community events:

No event found!
EXPLORE ALL EVENTS

Want to learn more about how you can help Alignment Rockford use EDI data to make a positive difference for the children in our community?